This website is made possible by Amalgation webdesign. We apologies for the inconvenience. The English translation is not yet complete.

Follow us on Facebook or You Tube and check out more of our video´s about bearded dragons.

The bearded dragon has the scientific name Pogona vitticeps. This first name Pogona is the genus name and is derived from the greek word pogon, that means ' beard '. The second name vitticeps is a generic name, this means ' striped head '.

However, the used to have another scientific name because the species was still placed in the genus Amphibolurus. This outdated name was Amphibolurus vitticeps. Also the scientific name Acanthodraco vitticeps proposed but also this name is considered as outdated. The bearded dargon is not the only species that belonging to the genus Pogona, there are seven other species.

Virtually all bearded dragons available in America are captive bred, as Australia has strict laws against exportation of its wildlife. 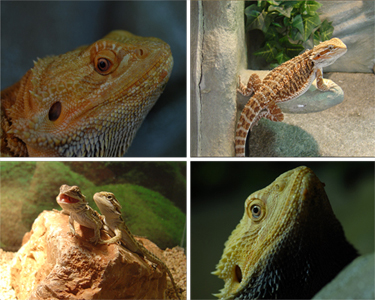