This website is made possible by Amalgation webdesign. We apologies for the inconvenience. The English translation is not yet complete.

Follow us on Facebook or You Tube and check out more of our video´s about bearded dragons.

The birth of a Bearded Dragoon

The eggs hatch after about 50 to 70 days. Just before they hatch dents the eggs a little bit in. (eggs can also dent due to moisture deficit. This should not be confused with the release of the eggs. When there is some lukewarm water in addition to the eggs dripped gently, pulling the eggs back. They come then again on tension.) Once they dent it can sometimes take several days for the eggs still tear open. Sometimes one can observe small movements in the egg. The eggs are common within 24 hours of each other (also depending on the temperature differences in the incubator). This means that sometimes a few days can last for a full clutch is released. 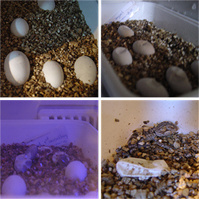 Push the small barbs heart with their nose against the inside of the egg shell. On the tip of the nose is the eitand. This helps to break the youngster to the egg shell. Once the cups by the scale are broken they lose their eitand. Once the cups from the egg, they lie sometimes hours quiet. Them rest out and creep step by step a little further from the egg. The umbilical cord is stuck and slowly begins to break free. The animals are generally hatched in a circular motion.

Sometimes it's hard to see how the critters to come strubbelen to get out of the egg. The animals must really crawl from the egg on their own. If they don't come out of the egg independently, this is a sign of weakness. Nature decides that the strongest survive. The umbilical cord should also let go by itself, so am not going to mess around. That's because the umbilical cord can tear. This can cause a small innocent bleeding, but also a serious internal bleeding to which the animals can die.

As she leads (Â± 10 cm large), then relax and let them dry. Place the young than in a small terrarium under a heat and Uv lamp. Some claim that the first 24 hours the young barbs in the incubator. However, this is not in any cases wisely. It may be that the eggs are stimulated to come out, because the brothers and sisters gently over and crawl along the eggs (as is often described in the literature). However, some barbs go digging, making the other eggs to be able to roll. This allows the beard in the egg become damaged and die. In addition the bearded dragons to use more and more oxygen in the incubator (despite some ventilation). Often has an incubator multiple floors through which the bearded dragons also can fall down. All reasons for a bearded Dragon not too long in the incubator to let it sit like this out of the egg is crawled.

First the hands properly disinfected with disinfectant (prevent infections can penetrate inward through the umbilical cord). Let this air dry before you pick up a beard. Try the animals quiet and careful. When the boy from the incubator, they seem sometimes limp and listless. This is because the birth much effort and the animals have been exhausted. Please notice; they can suddenly become active and streaking. Under the heat lamp knappen they quickly.